A week of early morning and evening dips at Trowse in early September, written during the week

The water is getting colder quite quickly this early autumn, though without my usually trusty thermometer (which suddenly failed a couple of days ago) I can’t put actual numbers to that. On Sunday evening at Trowse Meadow it felt like a reasonable summer temperature, 18 degrees at a guess. A lovely if short swim as the sun set. Downstream from the big willow to where the rope swing hangs on a big ash tree, where I climb up its roots to get out.

On Monday morning at sunrise there was mist rising from the water, suggesting it was still fairly warm while the air was colder after a chilly clear night. No time to swim before the first day of a week’s work.

That evening I noticed the chill as I plunged straight in with – unusually for me – no faffing at all, and struck out for the main river and away from the meadow, up between overhanging trees. On returning, the smaller millstream was noticeably warmer than the main river Yare. It was a beautiful sunset, and bats were skimming across the water, whizzing past me at breathtaking speed, and an owl called in the trees. The rays of the sun went behind the trees leaving only a memory of warmth, so I hastened to the van to get dry and warm.

Tuesday morning was due to be sunny, but the sun hadn’t yet risen when I got out of a warm bed and walked across the grass, wondering why I was doing this at such an early hour. (Doing it as an antidote to a day due to be spent mostly sitting indoors and as a challenge. Early, to fit in with an early start to the work.) I was pleased that I again got straight in, though putting my head in took longer. No mist above the water evocative of late summer mornings – in part as the night was less cold, but as I found out also because the water was definitely colder, with the tell tale tingle of cold in the hands. Once I got in the morning dip was exhilarating, but I was glad to run back and get into my still warm bed afterwards.

Tuesday evening was gloriously sunny and warm, so I went for a jog upstream by the river. I passed two men standing in the water by the mill, and envied them. On the return loop I had a go on the new play equipment in Trowse playground, making myself dizzy on the sparkling new big roundabout and doing some good exercise on the old-fashioned swings. 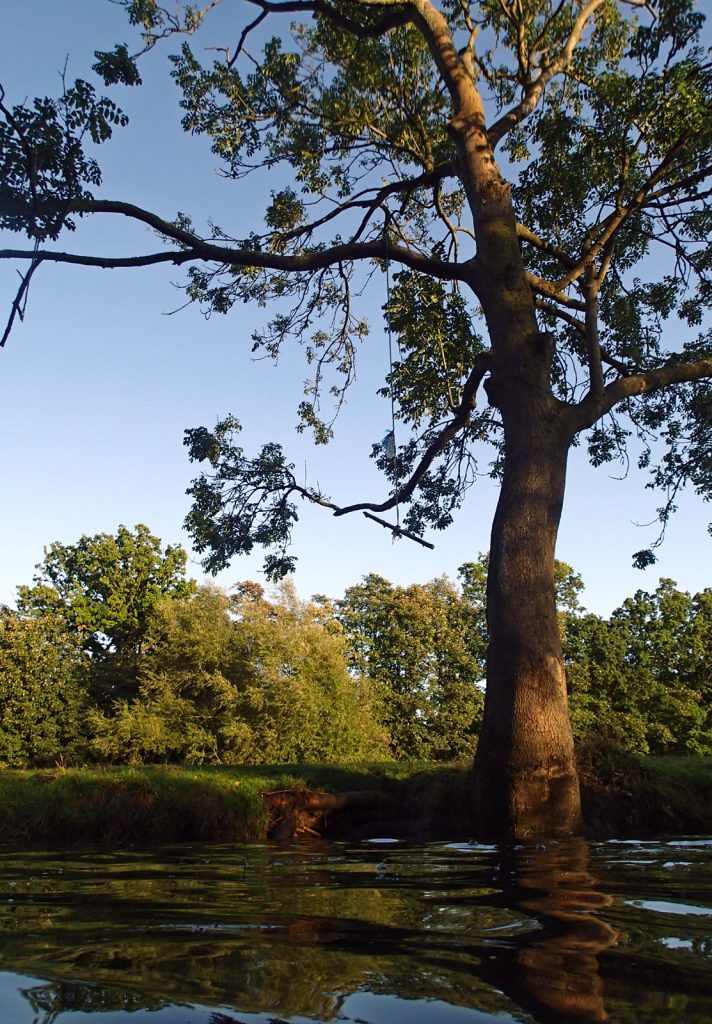 Hot from all this, I went into the river down the tangle of roots at the end of the meadow and swam upstream. At the big ash tree I stopped to chat to a young man who gave me a helping hand out, saving me from an inelegant exit up its roots onto the meadow. He knew the river well, where to get out if you swim downstream below the meadow, where to wild camp. He told me he had seen the water high up the banks earlier. I had no idea this stretch was tidal. We met two locals fishing and eating fish and chips. There would have been more people about on this lovely evening if the van dwellers had not been evicted.

Wednesday morning, 4 September
I heard the rain drumming on the roof of my campervan in the night, again when the alarm woke me at 5.15 and again at 5.25 after I hit the snooze button. I had to talk myself into getting into swimming costume and changing robe, and into putting on wet sandals to walk across the wet meadow. In the rain it was barely light when I got into the water. I swam with raindrops on the water, and as I was wet anyway it was less difficult to submerge, and the cloudy skies made it less cold. As ever I was glad I did, feeling refreshed as I got out and into my robe.

Another lovely day once the rain cleared, so early Wednesday evening I drove down to the picnic car park at the far end of Whitlingham Lane, put on swim boots and costume, took robe and towel down to the corner where the main Yare river meets the channel to the Broad, and got in at a small beach. I waited until the racing kayaks passed, swam across the river and climbed up under a big overhanging sycamore whose roots formed a ladder. I ran along the path, through thistles and nettles, down a bank, across a stream, up the bank, across the now weed covered spit and into the small broad. For years people swam here, keeping the spit clear for spring nesting birds, so it was sad to see it an inaccessible mess. I got into the noticeably warmer and delightfully clean and clear water, much weedier now no one swims here. The sun was beginning to set, so the sky was full of pink clouds. I returned the same way, through weeds, stream, banks, thistles, along the path, down the tree root ladder, again waited while the kayaks speeded back, and just got across the river before the slower kayakers went by. A nice adventure!

There are fewer or no motor boats on the Broads rivers in the evening, as they all moor up early as places are limited. But swimmers still need to take care, by being visible with bright hats, tow floats, or by keeping alert and out of the way of boats.

On Thursday morning I had no time to swim, but saw that the water was mist covered in the colder air, and the heron stood motionless on the boardwalk.

Trowse Meadow is called The Watermeadow, a local told me, and the reason became clear on Thursday evening when I went down to swim. I was paddling across the field in my sandals through ankle deep water. My usual entry point was 6″ under water, about 18″/half a metre higher than usual. So getting in and out was easier. I noticed that the incoming tide had brought up twigs, leaves, dust, duckweed and other debris, as well as washing in cowpats from the meadow, so I kept my head out of the water. It was odd swimming with my head above the level of the bank. Apparently the meadow floods once or twice a month when the tide is particularly high, and in winter the whole field can be flooded and sometimes it freezes. As I walked round later water was still coming in from the river, and it took a long time to go down.

On Friday morning the water was still up to my ankles. It was an uninviting cloudy and dark morning, and I almost ducked out of a dip. The swans were asleep on the water; a heron flew off with its harsh “craaaark” cry. As usual the moorhen roosting in the sallow tree plopped into the water as I approached, and bats whizzed about me catching the last flies before it became fully light. The water was hand chillingly cold, but refreshing, and once out I soon warmed up in fleece and thick socks.

I had one last swim on Friday evening, this time joining the local Meetup swimmers. We got in at the roots and swam upstream chatting. I got out at the corner and ran back alongside on the still wet grass while they swam back. After a long week I decided not to push it by getting too cold.

It was a week of many and varied swims, with temperatures dropping but my bravery in getting in increasing. The swims made a week of indoor inactive work bearable.